Angela Serino: You are never not supposed to be working 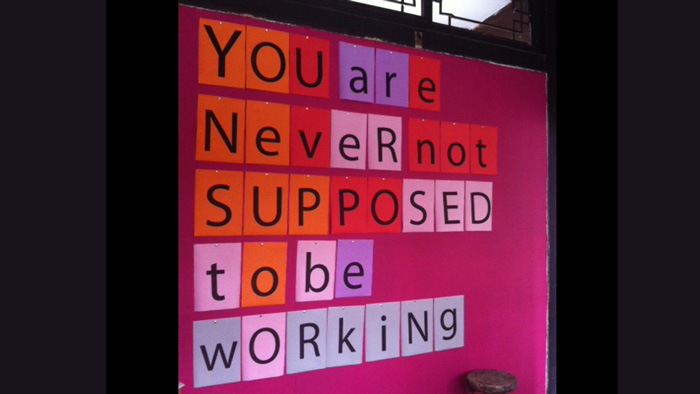 You are never supposed to be working is a new episode of “Bodies at Work”(1) that presents a series of works and interventions in which the pressure of mindfulness described by Sarat Maharaj (link to BAR Angela’s page) becomes visible and comes into play in specific situations and in different work spaces: from the open spaces of offices in the glass buildings of large corporations, to the new co-working tables used by self-employed employees. , and even the domestic spaces of a living room converted into a temporary office. As we will see, the dynamics and reasons for instigating or implicitly expecting such presence of mind in these work spaces are various and diverse. And those differences speak volumes. The public presentation will be the occasion to trace and discuss them together.

Thursday 26 June, 18:00, Hangar, Barcelona You are never not supposed to be working

The Ghost in the Factory introduction by curator Angela Serino

Act(s) on the table / Actos sobre la mesa intervention by the artist Claudia Pages Rabal
A table: that was once a frustrated work, that wants to become a co-working table, but ends up being a pretext for an (im) possible love story between two, three, four or more characters who are busy looking for the potential of the “we”, either as a common disinterest or as a new advantageous business model.

Work, Marianne Flotron, video (2011), 44 min
The artist invited the director of the Columbian Theater of Oppressed Hector Aristizábal to work for a week in an insurance company in the Netherlands, which organized a forum/play (a form of Theater of the Oppressed) in the company’s facilities, helped by various actors and employees. In the contemporary work society, in which most subjects identify themselves through work, “Work” emphasizes the way in which the capitalist economy shapes behavior and influences mentality using the knowledge of the social Sciences.

A New Product, Harun Farocki, documentary (2012), 36 min
Farocki immersed himself for a year in the world of QT, Quickborner Team, a business consultancy from Hamburg that specializes in optimizing workplaces within the knowledge industry. He followed their meetings and their attempts to develop a new consulting product. The result is a compelling portrait of how the design of human work and spaces for human work are conceived and discussed in the business culture of companies. In the author’s words, “the film shows that words are not just tools, they have become the object of speculation.”

Saturday June 28, 12:00, NyamNyam, Barcelona Inside and outside. Staying or leaving as strategies for survival

“Inside and Outside” is a journey through images and texts from artists’ publications compiled by the curator Angela Serino and the ‘founder and director of multiples Anna Pahissa to describe what happens between the walls of a house, around a kitchen table or in a living room turned office when life is shaken by the anxieties and pressure of (over)production generated by their professions, the desires and temptations to steal time, find a way to disappear or get out of the house permanently begins to sneak up on their heads.

(1) “Bodies at Work” is a research project between curator Angela Serino and artist Maja Bekan that examines and reveals what kind(s) of “work” artistic and cultural workers do. What is your relationship with time and space, how and for whom do you work, how do you balance your private, social and professional life, and what are the advantages and disadvantages of these kinds of circumstances? Through diverse collaborations, “Bodies at Work” wraps itself in minimal performances, conferences, conversations, and print materials. The first part of the project took place in Beijing, China in 2013.