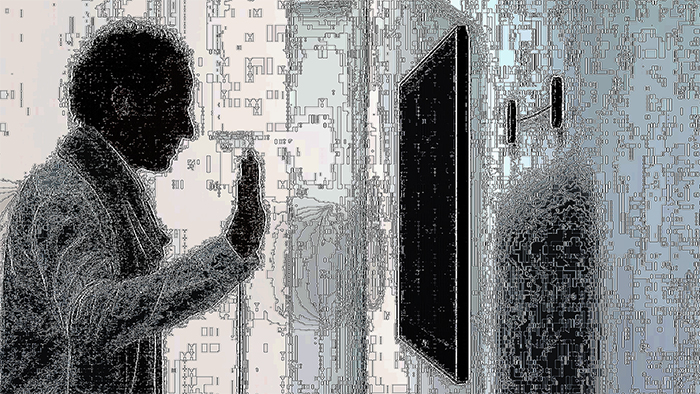 Introduced by Carles Guerra, this chapter focuses on the moment of change between analog and digital in the post-Fordist labor scenario. The three films, through a futuristic aesthetic, delve into different moments of this process, speculating on the possibilities of the future and reflecting on the present consequences.

Description of the films

Rosa Barba, Somnium, 2011, 19’10” A science fiction film based on interviews with local residents and people involved in the Maasvlakte 2 land raising project in Rotterdam. In the interviews, Rosa Barba asks what this land could be like in the future. As we watch images of this new land, we hear a story that apparently takes place in the future. Combined with archive photographs of the port, images of a ballet between man and machine appear, facing a futuristic landscape.

The Otholit Group, Anathema, 2011, 37’ Anathema reimagines the microscopic behavior of liquid crystals subjected to turbulence as a sentient entity possessing the fingertips and eyes captivated by the LCD touch screens of communicative capitalism. It can be understood as an object-oriented video that isolates and recombines the magical gestures of the capitalist factory dream.

Ali Kazma, Automobile Factory, 2012, 10’27” Presents the operation of the Audi factory in Ingolstadt, Germany. The great car assembly line works with minute precision, like an orchestrated ballet. Ali Kazma would invent the world of work and the material of human production as an aesthetic.