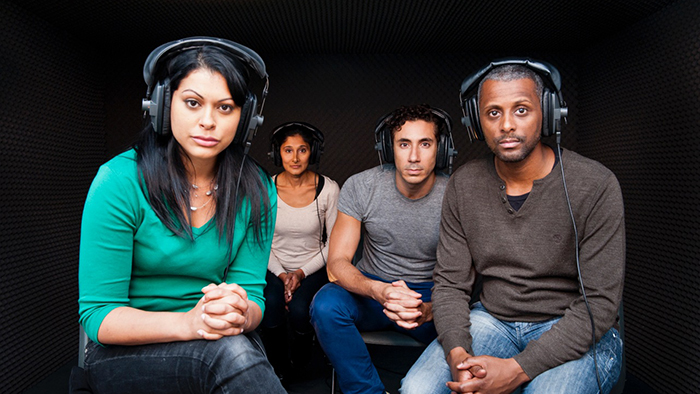 For every native speaker of the English language, there are 3 non-native speakers. As the world’s primary lingua franca, English is now a language whose syntax, vocabularies and pronunciation vary across the globe. Strangely, this non-native English language does not itself have a name or status; its use is considered something of a natural fact; and its creative potential is too often ignored.

That is why in her new film, Nicoline van Harskamp wants to try to represent a world where English has developed into precisely a language of non-standards; a world where ‘Englishes’ is spoken by people across all ages, regions and classes. Because the piece’s subject-matter is also its medium, Nicoline will need to predict the character of this ‘Englishes’ and actually write a script in a global language of the future. In order to do this, she is now visiting crucial places of interest, to interview people and organise debates.

To her, Barcelona is a fascinating place when it comes to the history and future of languages. “Internationalist languages” Esperanto and English have been spoken at crucial moments in its history. The relation between Catalan and Spanish have been very dynamic at all times. Barcelona is also where the United Nations Declaration of Universal Linguistics Rights was signed in 1996. And of course, English is now used widely in its tourist and educational realms.

In this public event in the What’s Up! language school, Nicoline would very much like to hear from you what you think a future English might sound like in Barcelona and in other parts of the world. She would also like to know more about what you consider to be a ‘mother tongue’ and how it relates to or differs from the English that you know. The video recordings that are made during the event may be used as part of Nicoline’s ongoing project.

You can find more information about Nicoline’s works and projects here and on youtube.

Her project in Barcelona is hosted by BAR project as the final event of her residency, and is a collaboration with the Fundació Antoni Tàpies. The project In Englishes is funded by the Mondriaan Foundation in Amsterdam

She was commissioned by Tate Modern, London, to make a live performance on the same topic. You can view it here.