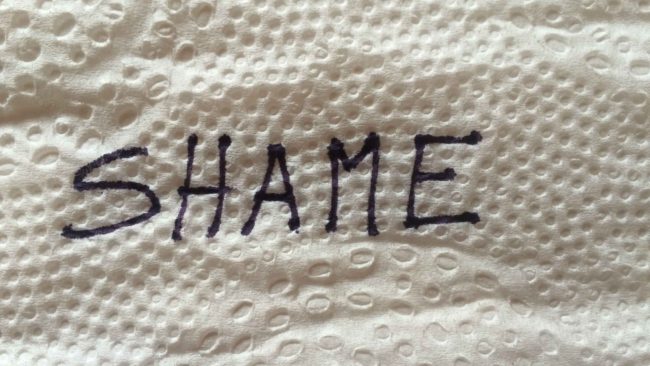 In the context of BAR project curatorial program, which this year investigates the politics of control of human behaviour, residents Valentina Desideri and Florencia Portocarrero revisit the feminist claim of the personal as political, and they propose an exploration of the role of inappropriate feelings in both, oppression and political transformation, through a studio practice.

This Monday 2nd of May, we invite you to study, feel and perform shame. You are welcome to join us with your own experience for as long or as short as you like and participate as actively or passively as you feel like.

At 8pm curator Anna Manubens will use her recent curatorial project, Visceral Blue (La Capella, Barcelona, 2016) as a case study and starting ground to unfold the presence and use of shame and embarrassment in some of the exhibited works, but also to rehearse a few ideas on shame and disfiguration that could not be included in that exhibition and which might be the source of a new one.

Anna Manubens is an independent curator, writer and producer with a preference for hybrid roles at the intersection between research, public programming, close project development and exhibition making. She is currently based in Barcelona but is often in Brussels where she works part-time for the artist-run organisation Auguste Orts, dedicated to the production of, and thinking around artists’ films. In parallel she teaches at Universitat Pompeu Fabra (Barcelona) and develops curatorial projects among which the most recent are: When you Fall Into a Trance (La Loge, Brussels, 2014), Moving Image Contours, co-curated with Soledad Gutiérrez, (Tabakalera, San Sebastián, 2015), Hacer cuerpo con la máquina: Joachim Koester, (Blue Project Foundation, Barcelona, 2016) and Visceral Blue (La Capella; Barcelona, 2016).