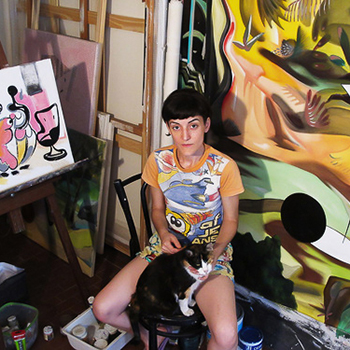 Ad Minoliti (1980, Buenos Aires) lives and works in Buenos Aires. She makes experimental installations around geometry and abstraction that encompass art history, architecture, queer feminism, childhood, animalism, and speculative fiction. She looks for a non-binary geometry where gender theories are applied to pictorial language using collage and mixed media. They earned a BFA from the National Academy of Fine Arts Pueyrredón, Argentina. She was an agent at the Artistic Investigation Center of Argentina since 2009, year in which they also founded the group PintorAs, a feminist collective of Argentinian painters. Besides he has won more than seven awards in her country, and he has received grants from the Ministry of Culture of Argentina, the Metropolitan Fund for the Arts of Buenos Aires and Mexico’s FONCA Conaculta, among others. Their work has been exhibited at galleries, institutions, and museums in Los Angeles, Puerto Rico, London, San Francisco, Berlin, Paris, Mexico, New York, Japan, Brazil, Peru, Spain, Ireland, Bolivia, Chile, Austria, among other countries. She participated in the Bienal del Mercosur in Porto Alegre, the Aichi Triennale, Front Cleveland Triennal and 2019 Venice Biennale.