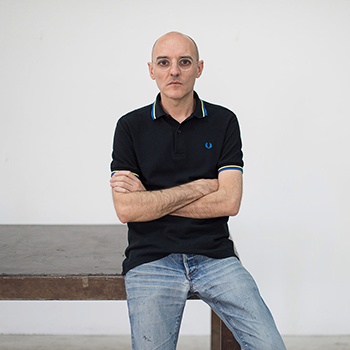 Joan Morey (1972, Mallorca, Spain) is a visual artist based in Barcelona. He studied Fine Art at the Universitat de Barcelona, and currently resides in that city. His work explores the language of performance to generate and stage events in which one or more interpreters are subject to a rigid system of instructions and norms. Viewers can then extrapolate these guidelines in relation to their daily life and to the role power structures and micropolitics play in our lives. Morey’s performances focus on concepts such as perversion, dependence, fear, nihilism, rebellion and tedium. In the late nineties, he was known by the acronym STP (standing for: I am your whore), presenting his performances under this name and creating a fertile contamination between art, fashion and advertising. By instrumentalising the creative act, he reveals the dependence of artistic creation on power and market structures. He has presented his projects at the Centre d’Art Santa Mònica, Barcelona (2006); Centro Galego de Arte Contemporánea, Santiago de Compostela (2007); Capella de la Misericòrdia, Palma de Mallorca (2010); Fabra i Coats, Barcelona (2012); MACBA, Barcelona (2013); Museu Es Baluard, Palma de Mallorca (2015); and Centre de Cultura Contemporànea de Barcelona (2017).