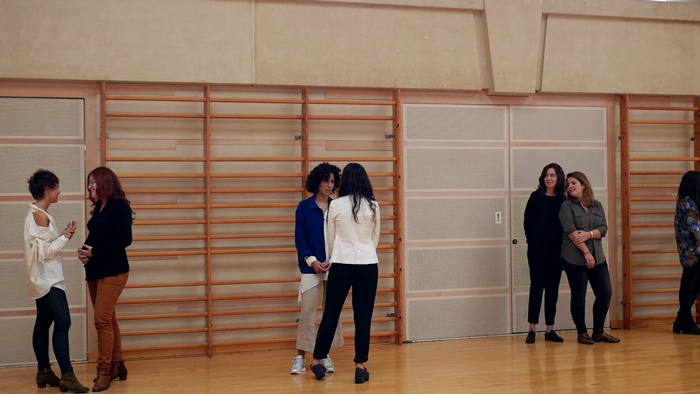 For the joy of being together, they didn’t have to agree is the last of the three presentations of In a convivial mode, a series of exhibitions, actions, conversations and screenings by residents Gaby Felten, Maja Ćirić and Alex Martinis Roe at àngels barcelona and àngels barcelona espai 2. The residents decided to present their projects in the same physical context, because of the conviviality, closeness and proximity that living and working together has created among them. Their projects are not the product of a collaborative work process, but an attempt to create a common public space for the presentation of an ongoing dialogue and exchange.

For the joy of being together, they didn’t have to agree is the new film that Alex Martinis Roe has made during the three-month residency in Barcelona, which is part of the To Become Two series, a project in process that includes a cycle of film installations, a workshop series, a series of public events, and a book on a specific genealogy of feminist politics. To Become Two is a theory-practice history project, tracing a particular genealogy of political practice among a number of different feminist communities. The artist has attempted to look simultaneously at collective and personal histories in order to explore what has been, and what could be, transferred into feminist collective practices now and in the future. Each of the films explore the history and organisation of a particular collective or milieu and its connections to the groups explored in the other films: the Milan Women’s Bookstore Collective, Psychanalyse et Politique (Paris), Women’s Studies at Utrecht University, The Netherlands, a network of people who were part of the Sydney Women’s Film Group and General Philosophy at Sydney University in the late 70s and early 80s and then a milieu in Barcelona including Duoda and Ca La Dona. The artist works directly with these groups, and a younger generation around them, to performatively bring about new collective practices through the act of storytelling using various methods, including participant observation, oral history interviewing, archival research and collaborative social practices. In addition, each of these films explores the interior-architectural spaces that were used and created by these groups as a meditation on the materiality of each dispositif of their political practices. Her hope is that in telling these stories, new propositions for collective practices will emerge.

For the joy of being together, they didn’t have to agree narrates a series of stories of how the political practice of a particular group of Italian feminists was taken on and developed by a very large and active milieu in the 90s in Barcelona. One of the main questions that the film explores is: how can one learn from the story of the practice of another? Through her oral history research the artist has discovered that in Barcelona the way the practice from Italy was translated into new contexts became a way for different groups to work together through difference. The other key discovery has been that this work, despite its difficulty, has only been possible because of its politics of desire, affirmation and joy, which in a relatively short span of time has reshaped the lives of women in Barcelona by enabling them to create their own spaces and communities. The film was shot at Barcelona’s City Hall, the INEFC sports centre in Montjuic, the Guixot bar in the Raval district and an apartment in the district of Sant Pere, La Ribera. Here eight women engage in a series of translations of these stories in these locations where the events in the stories took place. These stories were written by the artist, and then translated live into Spanish and Catalan, and then into English again.

Alex Martinis Roe was born in Melbourne, Australia in 1982 and has lived and worked in Berlin since 2009. Her current projects focus on feminist genealogies and seek to foster specific and productive relations between different generations, as a way of participating in the construction of feminist histories and futures. This involves developing research and storytelling methodologies, which employ non-linear understandings of time, respond to the specific practices of different communities, experiment with the dispositives of discursive encounter, and imagine how these entanglements can inform new political practices. In addition to her current research project To Become Two, she is exploring these methodological concerns in collaboration with theorist Melanie Sehgal, leading a research group called FORMATIONS within the framework of the Haus der Kulturen der Welt.

Her most recent shows and events include: being the organiser of Affirmative Practices and Our Future Network, Haus der Kulturen der Welt, Berlin (2014, 2015); Their desire rang through the halls and into the tower, performance commissioned by Casco – Office for Art, Design and Theory, and co-presented by If I Can’t Dance, Academiegebouw, Utrecht (2014); Once I wrote the story of her life, because by then I knew it by heart, Rongwrong, Amsterdam (solo, 2014); Making Room: Spaces of Anticipation, ar/ge Kunst Galerie Museum, Bolzano (2014); A story from Circolo della rosa, Archive Kabinett, Berlin (solo, 2014); NEW13, Australian Centre for Contemporary Art (2013); non-writing histories, Artspace, Sydney (solo, 2012).

In collaboration with àngels barcelona