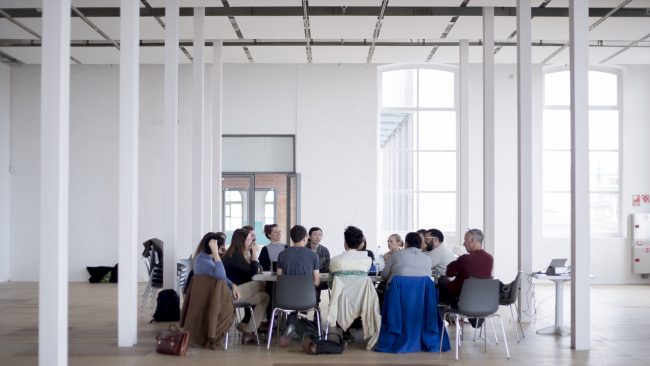 This module will bring a choir of voices that speak of the night, the bodies, the feminine, the movements, the independent, the communal or the discordant to compose a shared learning space where different practices converge.

“Performance actions at the Palais de Tokyo: Do ​​Disturb & La Manutention” presentation by Vittoria Matarrese
For 4 years, the DO DISTURB festival has put the Palais de Tokyo in a state of effervescence, day and night, with more than 40 proposals a year at the crossroads of dance, performance, theater and music, pursuing the idea of ​​inviting cultural partners from France and abroad. At the same time, in the fall of 2017, Palais de Tokio inaugurates La Manutention, a residency program dedicated to performance art. From October to July, six emerging artists are invited to take part in a residency program for a period of one month. This new format welcomes and encourages exploration and experimentation, giving artists the opportunity to develop their practices and produce original work, turning the Palais de Tokyo spaces into a studio.

Vittoria Matarrese, graduated in architecture in Paris, is director of the performing arts department of the Palais de Tokyo and curator of performance art. Her atypical career led her to lead various international positions, including artistic director of the Villa Medici in Rome and head of international communication at the Venice Film Festival. During her career, she worked at the intersection of different disciplines, from film to dance and theater, collaborating from a very young age with different personalities, such as brilliant choreographers or directors. This polysemy is now at the center of her research on the performing arts.

What does an alternate space do? Lecture by Anna Colin
In her presentation, Anna Colin will share her thoughts on the question “What makes an alternative space?” -the topic of her doctoral research, which draws on past curatorial projects, her experience at Open School East, as well as a small variety of international contemporary and historical events in alternative education, art and spaces and social experiments.

The alternative space that constitutes the object of its study is a social center with local and democratic roots, based on education in which different forms of learning, sociabilities, audiences and uses coexist. The study of it strives to answer the following questions, from architectural, educational, sociological and economic perspectives: What spatial form do the alternatives assume? What constitutes realistic alternative governance, financial and business models for such spaces? What is needed to remain an alternative as internal and external circumstances change? And how do alternative spaces relate to society’s broader production of political, economic, and social alternatives?

Anna Colin is a curator, educator, and researcher. She co-founded and co-directed Open School East in Margate, UK, an alternative space for artistic and collaborative learning. Anna herself also works as an associate curator at Lafayette Anticipations – Fondation d’entreprise Galeries Lafayette in Paris, and she is a PhD candidate at the School of Geography at the University of Nottingham. Anna co-curated, with Lydia Yee, the traveling exhibition British Art Show 8 (Leeds, Edinburgh, Norwich and Southampton) in 2015-16. Previously, Ella Anna was Associate Director of Bétonsalon – Center for Art and Research, Paris (2011-12), Associate Curator at La Maison populaire, Montreuil (2012), and Curator at Gasworks, London (2007-10).

“We own the night” by Julie Boukobza
Julie Boukobza is a curator and art critic based in Paris, she is in charge of the LUMA Arles Residency Program. Boukobza has co-curated, with Simon Castets, a group exhibition at the Belgrade Museum of Contemporary Art called “FADE IN 2 EXT. MODERNIST HOME” in July 2017. In 2016 he curated the exhibition “Pure Fiction” at Marian’s gallery Goodman and a solo show by Peter Shire at the New Galerie, both in Paris. She currently directs the Luma Arles residency program as well as the 89plus residency program at the Google Cultural Institute Laboratory in Paris. In 2020, she will co-curate with Julia Morandeira Arrizabalaga an exhibition at the Centro de Arte Dos de Mayo in Madrid, Spain.

Claudia Pagès lives and works in Barcelona. Ella’s practice addresses bioeconomic processes and translation, and is published and distributed through presentations and readings, print, and objects/installations to explore uses and effects of language. The artist has exhibited solo and as a duo in institutions such as Yaby, Madrid (2018), La Capella, Barcelona (2017), Rongwrong, Amsterdam (2016), P ///// AKT, Amsterdam (2015). Her most recent performances stand out at the Sharjah Art Foundation, Sharjah UAE (2018), Ca2M, Madrid (2017), RAI10 / Fundación Arthena, Düsseldorf (2016), La Casa Encendida, Madrid (2016), Moderna Museet , Stockholm (2015). She has been a resident at LiveWorks, Centrale Fies (2017), Gasworks, London (2017), Ca2M and La Casa Encendida, Madrid, (2016) and has received the Mondriaan fonds Werkbijdrage Jong Talent award, Netherlands (2016-2017).

BAR module is a flexible pedagogical format that aims to generate learning opportunities around various topics and dynamics. It is an intensive week of work in the city of Barcelona that seeks to generate learning spaces through different themes and dynamics. As part of the BAR TOOL#2 Training Program, the BAR modules will be opened to a wider audience (researchers, students, curators, artists, educators, etc).