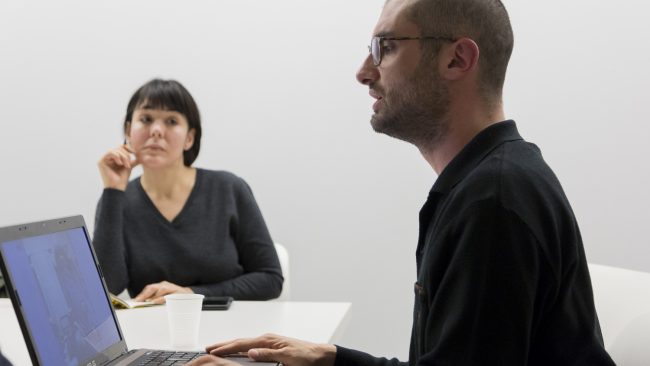 The curators Summer Guthery (JOAN, Los Angeles) and Alfredo Aracil (Sala de Arte Joven 2017, Madrid) will tell us about their curatorial work and their recent and ongoing projects.

Summer Guthery is a Los Angeles-based curator and writer. She is the founder and director of the non-for-profit space JOAN. Before founding JOAN, she was a curator at LAXART and an assistant curator for Performa Biennale 2013 and 2011. Alongside these positions, she co-founded the Chrysler Series, a series of readings, screenings, and performances in an office in the Chrysler Building in New York. In 2014, she was selected as Curator-in-Residence at Disjecta Art Center in Portland, Oregon programming 9 months of exhibitions and performances. She received her Masters in Curatorial Studies from CCS of Bard College. Guthery is a regular contributor to Frieze and Artforum among other publications.

Alfredo Aracil is curator for the Sala de Arte Joven de Madrid 2017 with the project Notes for a destructive psychiatry that studies the history and present of mental health from aesthetic and political positions that go beyond the usual space of the clinic. He has collaborated with the magazines Nosotros, El Cuaderno, Tendencias and LUMIÈRE and currently publishes in Atlántica XII and El Estado Mental.