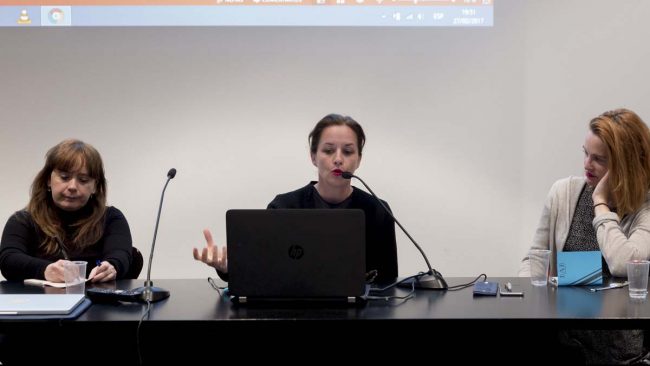 Dorothée Dupuis (1980, Paris) curator and editor. Her practice focuses mainly on the intersection of the arts and politics, influenced by feminist, Marxist and postcolonial theories. Dupuis is Terremoto.mx magazine founder, based in Mexico City, where she currently works as director and editor. She is also co-director of the feminist magazine Petunia with Lili Reynaud Dewar and Valérie Chartrain.

Inés Katzenstein Director founder of Art Department of Torcuato Di Tella University. She received a master’s degree from the Center for Curatorial Studies, Bard College, New York (2001), where she studied with an Antorchas Foundation and the National Fund for the Arts grant. She wrote extensively on contemporary art and curated exhibitions such as “Liliana Porter: Photography and Fiction” (Centro Cultural Recoleta, Buenos Aires, 2003), “David Lamelas, Foreigner, Foreigner, Ètranger, Aüslander” (Museo Rufino Tamayo, Mexico, 2005) and co-curated “Televisión, El Di Tella and an episode in the life of TV” (Espaço Telefónica, 2010), among others. She is part of the Advisory Board of Otra Parte de Artes y Letras magazine, and of the Advisory Council of Museo Malba.

Gelen Jeleton (Murcia, 1975) developes her artistic practice with Jesús Arpal Moya in Equipo Jeleton since 1999. She studied Fine Arts in the University of Cuenca and graduated in the Department of Drawing of the Faculty of Fine Arts in Barcelona in Symbolism Renaissance and Alchemy. She moves this knowledges implementing them to her doctoral thesis project Una Archiva del DIY: self publishing and self management in a fanzinoteca feminist-queer, presented in Murcia in February 2016.
–
* Jeleton is a team to operate in iconographic, literary, musical repertoires. To propose self-taught practices and the publication of provisional results for the debate. To take the authorship to inexperience situations, humor, appropriation. To disperse the results in space, time and distribution channels, making it difficult to deactivate them by the presentation context.