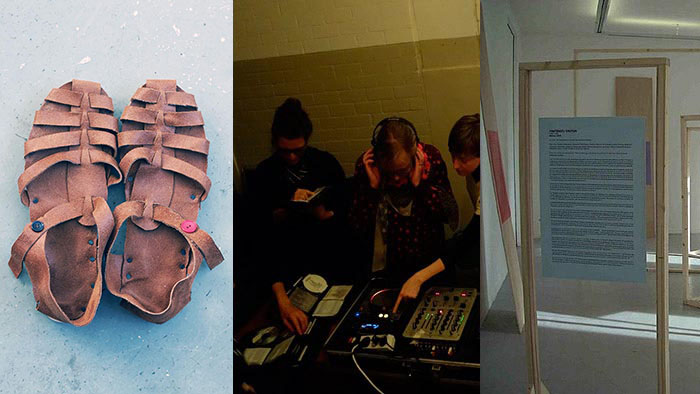 BAR project’s 2015 residency program is inviting artists and curators whose work research and essay different ways of living together in the world and alternative forms of community. In this context, artists Christian Nyampeta (UK), and Maria Guggenbichler (D), and curator Elena Yaichnikova (RS), in residence until the end of May, will be presenting their work and introducing the projects they are developing in Barcelona.

Christian Nyampeta
Christian Nyampeta is an artist who investigates into how individuals and communities negotiate forms of socially organised violence. Nyampeta makes use of what he, following his friends, refers to in terms of practical philosophy. This is a “poeisis of worlding”, making and doing that generates both singularised and collective considerations, in the hope that such understanding may relieve some of the anguish to which the legion of structural oppression subjects us.

Owing to the generosity of many and their collaborative efforts spanning over a number of years, Nyampeta has staged social encounters through which various artists, philosophers, practitioners, institutions and individuals live and work together, and through which workshops, seminars, interiors, instruments, exhibitions, fellowships and publications have been materialised. These activities take place regionally and further afield, in public institutions as well as in intimate circles of regional homes, in transnational research groups and other bodies that do not easily lend themselves to wording.

Nyampeta’s theoretical anchor is the study of the ways of work and life of the early ascetics and monks and their organisational principles. Nyampeta is a PhD candidate at the Visual Cultures Department of Goldsmiths, University of London. Here, he researches idiorrhythmy, a formational concept for regional utopian imaginaries drawn from early monasticism, proposed through the seminar lectures of Roland Barthes at the Collège de France titled How To Live Together.

Ongoing activities include contributions to research programmes of How We Behave, The Grand Domestic Revolution, Practice International and Tagore’s Universal Allegories. Recent exhibitions include How to Live Together: Prototypes, The Showroom, London; New Habits, the research group exhibition organised by Casco – Office for Art Design and Theory, Utrecht; How To Live Together at Casco and at Stroom Den Haag between 2013 and 2014.
christiannyampeta.com

Maria Guggenbichler
Maria Guggenbichler is a conceptual artist and curator who uses social exchanges such as conversations, collaborations and jokes to find new functions for art in society. Her work is realised in ongoing and long-term dialogues and friendships. Outside institutional walls, her projects create accessible, joyful and reciprocal spaces, in self-organized, informal and often domestic structures. Since 2005, Maria has collaborated with the artist Rosalie Schweiker.

Together they organised a holiday for female artists (Funny Women Art, 2013); published a reader about the “fact that art institutions gladly incorporate feminism as long as it is authored by men” (Clever Men’s Art, 2014), and had a solo show under the name of a male artist (Outpost, Norwich, 2014).
Together with the curator Amal Alhaag, Maria founded the Side Room in Amsterdam. The Side Room is a platform for diverse actors’ intersectional feminist, queer and anti-colonial gathering, listening, learning, experimentation, dancing, DJ-ing, (re-)mixing, musings, and doings. Maria is co-editor of queer-lesbian arts magazine Girls Like Us since 2014.
mariaguggenbichler.com

Elena Yaichnikova
Moscow-based independent curator and art-critic. She studied History, Literature and History of Art in Moscow, and completed an International Curatorial Training Program at the Ecole du Magasin CNAC in Grenoble, France in 2005–2006. Her exhibitions and curatorial projects include Observations Diary(Art Re:flex gallery, St. Petersburg, 2013), Double Vision: Contemporary Art from Japan(Moscow Museum of Modern Art, 2012), Generation P: Young Artists from Moscow(Russenko festival, Paris, France, 2012), Once Upon a Present (Gallery SC, Zagreb, Croatia, 2011), Res publica in the frame of the France-Russia Year (Moscow Museum of Modern Art, 2010), 40 Lives of One Space, awarded a prize of the best curatorial project of the Special Program of the 3rd Moscow Biennale (2009), and Colocation [Living Together], a year-long program of exhibitions and public talks at La Box in 2007-2008 (Bourges, France). She was a curator of START project for young artists at Winzavod art center in 2011-2012. She has been working in the educational department of the Moscow Museum of Modern Art since 2013. She is a regular contributor to Russian and occasionally to international art press. frameworks.sitew.com