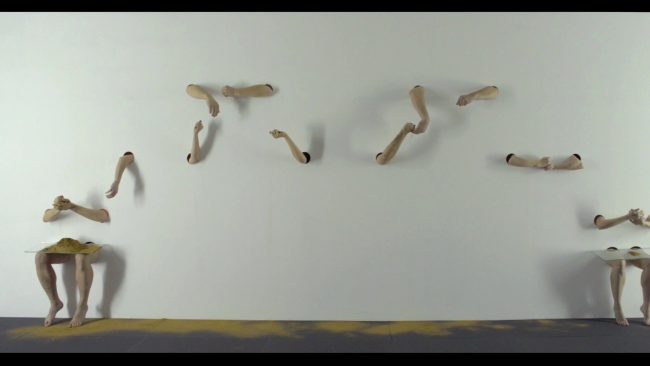 Within One’s Grasp is the second of the three presentations of In a convivial mode, a series of exhibitions, actions, conversations and screenings by residents Gaby Felten, Maja Ćirić and Alex Martinis Roe at àngels barcelona and àngels barcelona espai 2. Due to the conviviality, closeness and proximity that living and working together has created among them, the residents decide to present their projects in the same physical context. It is not a collaborative work process, but an attempt to create a common public space for the presentation of an ongoing dialogue and exchange.

Within One’s Grasp emerged as an answer to the question about how we treat reality based on an honest approach (Marina Garcés:2013). According to Garcés, to treat means to situate, and not to represent or intervene in subject-object relations; cause and effect. To realistically situate this project was to abandon the initial curatorial idea of placing artistic works and art agents in an unusual and desired physical setting such as the empty Olympic swimming pool of Barcelona, known for its splendid panorama of the city. Within One’s Grasp is an exhibition concerned with the micro-politics of art (even if they can influence the city), and not by the influences exerted by the assumptions of residing in Barcelona.

Within One’s Grasp is a final result that stands halfway through the intended event at the empty Olympic Swimming pool, and what was actually possible. Instead of appropriating the symbol of the Olympic Games (which completely changed the future of Barcelona) as a metaphor, we the art people were only able to do what was within our grasp and in our own field. To situate was only possible as a manner of reinforcing the position of the arts within a society and as a society. If it were not for the process of sharing, comparing and contrasting imaginaries between the artists and myself, then my authorship as a curator and an immaterial worker would remain abstract. Our social relations contribute to the content of the artworks, despite our differences. Treating in this case means that the micro-societies of the art world are not indifferent to their own inner struggles. The languages that artists use are multiple, but they reinforce each other. The presented works are not self-sufficient gestures, but gestures of self-problematisation: “self” being extended over and above the individual and toward the art community. The works aim to point out an artistic-curatorial urgency by dealing in actions that being in the present allow for, whether we are temporary or permanent residents of the city. In the absence of possibilities to change the larger game in macro-politics and because art is never only a play, it is by situating plural performativities and channeling these as a content and through authorship that we create micro-gestures of independence in the art world.

The works commissioned for this exhibition include a new work by Daniela Ortiz, an artist known for reconsidering colonial legacy, by tackling issues of class, gender and nation. With a specific gesture she will problematize the market related conditions and possibilities in relation to the artistic legacy. In the art work 13 days curatorial power was delegated to the artist Miquel Garcia, after having signed a mutual agreement on a napkin. His total autonomy based on nothing but trust, thus sets a condition for a mini-revolution. In this constellation the curator erases herself as a middle-woman and a trans-national precarious migrant who paradoxically embodies some symbolic power to integrate artists into the exhibition. The only conditions set were that his final work could not be a video nor include any kind of map. Paulina Silva Hauyon Lo Que No Se Dice uses art to open up an otherwise invisible space for tales made by older citizens, thus situating them in the art world. You Are Under My Power by Luke James, commissioned for this exhibition, is an example of institutional critique, that uses the method introduced by Tex Avery, as a method of counter-culture, based on failure and repetition. More precisely, James transposes the rules and tactics that define the chase between the characters of the cartoon Road Runner and Coyote to the realm of art. For example, when the Coyote, being the institution of art, tries to humiliate the Road Runner, being an artist, it actually bounces back to him. La Grua (A Crane) by Cristian Herrera Dalmau is a never exhibited, but a discussed example of the institutional crtique that treats collective efforts to overcome physical barriers in taking out an installation in a form of an elephant out of the Facultad de Bellas Artes de Barcelona. La Grua is constructed out of materials students left at that very institution. Sanja Latinović and Ranko Đanković are integrated as the only artists who have nothing to do with Barcelona. They take part with a video documentation of a performance White: Movement that treats the idea of passing form through a human structure, showing what gets lost in any creative process. Invisibilidad de trabajo by Joffrey Morel comes in a form of a maquette of the empty Olympic swmming pool and envisioned as a relational space. It is a art work in a funciton as a silent witness of the conversations between artists and a curator that preceeded the exhibition. In a descrete way, and in a form of a box, the maquette can be brought in and brought out from the institution.

All the above mentioned artist treat the institution of art in a way that they criticize, overcome or reinforce its conceptual and physical confines. Hovewer, the exhibition is not derived from the history of institutional critique, but from an organic relation to the art community and its contextual and material insecurities. As such, it aims to situate realistically a particular art community that exists in one moment of time in Barcelona, aware of its self-referentiallity.

Maja Ćirić, Ph.D. (1977, Belgrade) is an independent curator. Her areas of research and practice span from curating as institutional critique, through to the research of the geopolitics of the curatorial, with special emphasis on the transnational circulation of ideas and curating. She is a contributor to the theoretical discourse on curating through conferences (Academy of Visual Arts, Leipzig; European University Cyprus,Nicosia), publications (The Forager; OnCurating, FlashArt; BlackDog Publishers) and lectures (Kibutzim College of Education and the CCA Tel Aviv, Israel; Hangzhou Academy of Fine Arts, China). She thinks in terms of criticality and post-globalism, while believing that inter-personal encounters within the art world embody a potential for a twist in hegemony. Maja Ćirić curates in a context-responsive manner, mainly in smaller-scale institutions and projects spaces internationaly, from China to Europe and onwards to USA.

She recently served as a jury member for Young European Trieste Contemporanea Artist Award and is on the board of the Serbian Pavillion for the Architecture Biennale, La Biennale di Venezia 2016. She is curating a book for the Danish collective Hesselholdt & Mejlvang, due to be published in 2016. She also serves as a regional editor for South East Europe of the Art Market Dictionary, due to be published by DeGruyter in 2017.