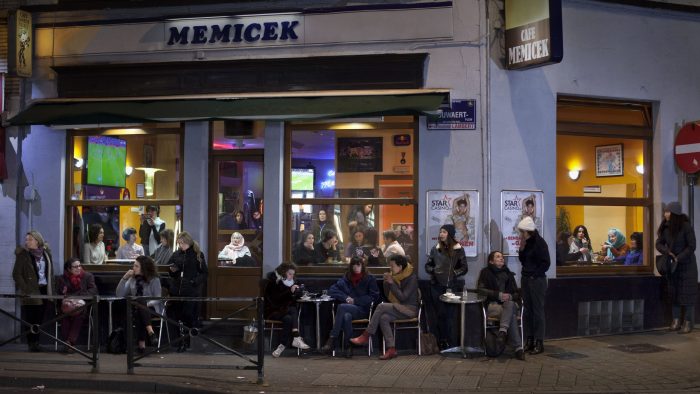 As the conclusion of her residency, Nouha Ben Yebdri, independent curator, founder and director of Mahal Art Space, an alternative art space dedicated to contemporary art in Tangier, ofers a screening session of the most incipient films of the French-Moroccan artist Randa Maroufi.

Randa Maroufi (1987) produces, after passing through Le Fresnoy – Studio national des arts contemporains, two films: La grande Safae and Le Park, both awarded at different international festivals, and screened in different alternative cinemas and museums. Before turning thirty, she adds to her portentous career another video, Stand-by Office, made during a residency in Amsterdam. In September 2017, she is a resident artist for one year at Casa Velázquez, in Madrid, where she continues with the research of Bab Sebta (Ceuta’s Gate), a project in which she works with video, photography, drawings and installations, around the economic system created on the border between Morocco and Ceuta.

The film La grande Safae is a free interpretation of a character known as the great Safae. Transvestite, she spends part of her life as an employee in a house, in which she lived with constant rumors and legends about her gender.

Le Park proposes a slow walk in an abandoned amusement park in the center of Casablanca (Morocco). The film presents the portrait of young people who frequent this place, and creates a staging of moments of their lives in it, meticulously composed and often inspired by images found on social networks.

In Stand-by Office, a group of people is presented in an administrative building. We can observe that a series of routine gestures happen: the person in the reception attends and answer calls, another organizes documents and files, others are preparing a meeting… Little by little, unexpected situations occur, taking the viewer to an unsuspected place.

Playing with the viewer’s perception, with subtlety and always on the borderline between fiction and reality, through her films, Maroufi opens the discussion on youth, gender and immigration, themes and contemporary questions, extrapolative to everyday life both in the Maghreb and in many European countries.

Nouha Ben Yebdri residency is a collaboration with Aria Projects.